Let’s do a little time travel together. The year is 1976, we are in a California garage with Steve Jobs and Steve Wozniak who think they are going to change the world. They begin building the Apple 1 personal computer kit and sell it for $666.66. They incorporate the company in 1977 and the rest is history. Now lets go back to 2011. Apple now has over 46,000 employees worldwide and is the Most Valuable Company in the World. That’s right, in 45 years, they went from a garage, to now being the most valuable company, in the world! 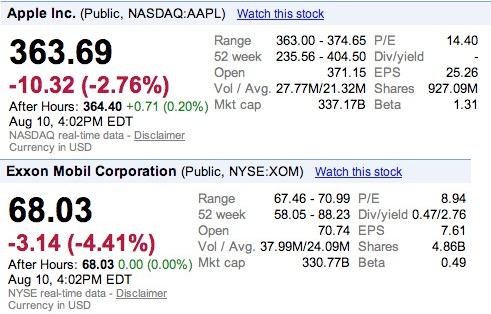 Yesterday, Apple passed Exxon Mobil for a brief moment, but Exxon regain strength at closing and was on top yesterday. Now today, as of close, Apple’s Market Cap is $337.17 Billion and Exxon is at $330.88 Billion. Looking at the facts, even though Apple is worth more, Exxon is still much larger than employee with employees and revenue.

Analysts are now saying that Apple could be the first Trillion-dollar company to be publicly traded. With Apple gaining 80% year over year, one would think that could be possible. That’s just another thing we’d have to just wait for, to see how it turns out.