Fall Detection, a feature introduced on Apple Watch Series 4, can recognize if a user takes a hard fall. It can alert local emergency services if the user is still unresponsive after 60 seconds. This feature is what helped saved an unresponsive man in Chandler, Arizona.

“On April 23, the Chandler Police Department’s Communications Center received a 911 call from a computer-enhanced voice indicating an Apple Watch user had fallen and was not responding.

The voice provided near-exact latitude and longitude coordinates of the man’s location to first responders.

Patrol officers and the Chandler Fire Department were dispatched to the location. They found the man wearing the Apple Watch had fainted and collapsed.” 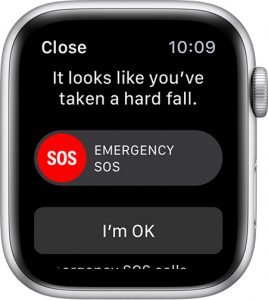 Fall Detection is available for Apple Watch Series 4 and later. It detects when a user has taken a hard fall, and triggers a series of reactions.

How to enable Fall Detection on Apple Watch

To enable Fall Detection in Apple Watch, follow these steps:

Fall Detection feature has saved countless lives since its release. One notable incident was when an 87-year-old woman was involved in a car crash, and her Apple Watch automatically called local emergency services and alerted her emergency contact list. Luckily she came out of the incident with only a few broken bones and credited the Apple Watch for saving her life.