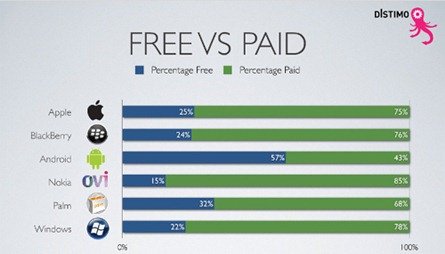 Who doesn’t love free applications? But I don’t mind paying for professional high-quality applications, but come on! Who wouldn’t like using free apps! According to Distimo, Android Market has the highest percentage of free applications (don’t forget it has 25,000+ apps! available.

But, don’t forget that the Android Market only allows paid applications in 11 countries, while others such as Apple allow 77 countries. So this can be uneven with the rest of the app stores.

Believe it or not, this huge amount of free applications attract people to the Android Platform. People love the variety, as well as free applications. So it will be one of the reasons the Android will get a boost, as well as being open source. But be aware, some unreliable developers are creating applications that can hurt your device, so make sure the application you are downloading is trusted, and don’t get intrigued by the app, until you confirm it’s legit.