Apple is one the leading computer vendors in the world and with the launch of iPad,a their shares in the mobile computing market have increased tremendously. Fortune reports that if we consider iPad in the category of notebooks and netbooks then Apple has the third highest share of global portable computers sales for the second quarter of this year in which Apple crossed Acer, ASUS, Dell and Toshiba and are now behind HP and Lenovo. 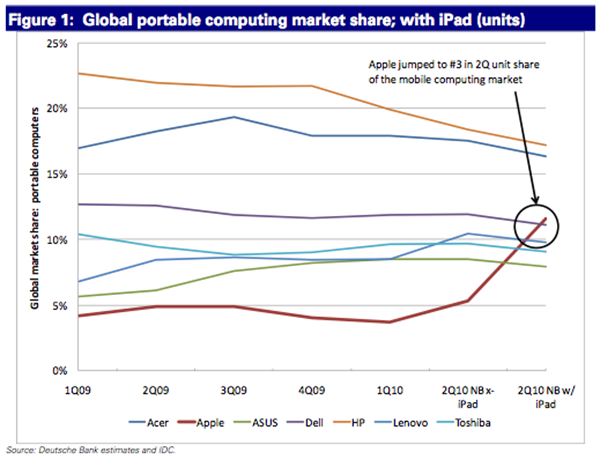 “When including the iPad as part of the NB [notebook] market,” he writes, “Apple leapt over Asus, Lenovo, Toshiba and Dell in terms of global unit share.”
Viewed this way, Apple goes from being No. 7 in the worldwide portable computer market to No. 3, after only Hewlett Packard (HPQ) and Acer. And it’s not stopping there, says Whitmore.

This report shows the data up to the month of June. With more sales of iPad around the world, Apple’s market share in global portable computers would increase and they may end up crossing Lenovo by the end of this year.

Even if we don’t count iPad, Apple’s sales in Macbooks and Macbook Air have also increased as they have crossed Dell, HP and Lenovo to achieve the second fastest rate of growth among mobile PC vendors behind netbook maker Acer. If you include iPad in it, then Apple would be way ahead of other companies. 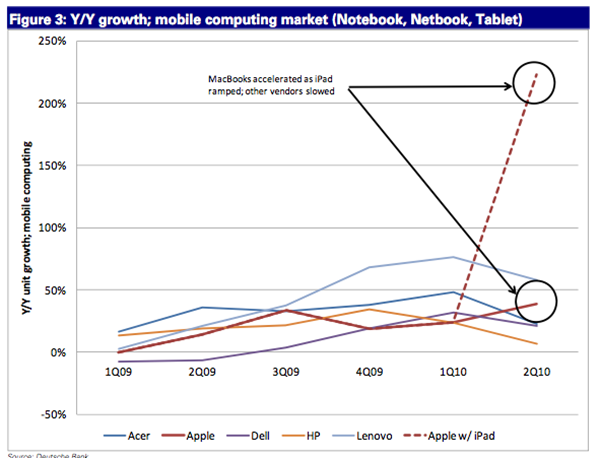 Apple’s sales will surely increase in the next quarter as iPad is launched in many more countries in the coming months. Some rumors suggest that Apple may launch a second generation of iPad by the end of this year with the introduction of a smaller OLED display iPad and if these rumors are true, then another launch will again boost up the company’s sales.