iPad has been a big success for Apple. The sales figures prove how many people are interested in this new category of products. Apple had sold more than three millions iPads within just three months and the figures will continue to improve for sure after the International launch. Now that the tablet dust has almost settled, rumors are making rounds that Apple is planning to launch their second generation of iPads later this year as reported by DigiTimes. They claim that the new generation will have OLED-based displays and would be available in 5.7-inch and 7-inch models. 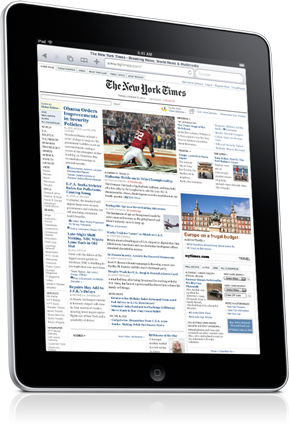 The report tells that Compal Electronics may receive orders to make this new iPad. They also claim that Apple has placed orders for new iPads to a Taiwan-based component maker for the last quartet of 2010 and the first quarter of 2011 which would include  9.7-inch, 7-inch and 5.6-inch models.

The new smaller iPad would mainly be targeted at the e-book reading market while the 9.7-inch model would be the main model for multimedia entertainment. The newer 9.7-inch models will have some minor changes.

We hope that the smaller and the larger iPads would have some more differences apart from the size. Hopefully a front facing camera in the new iPads so that users could use FaceTime with them.

DigiTimes Research senior analyst Mingchi Kuo thinks that these rumors may not be true because Samsung is the world’s dominant OLED manufacturer and even they are not able to produce enough panels for their own products. Mingchi Kuo doubts that an iPad with OLED display will we coming soon but it might launch in the second half of 2011.

These rumors are really interesting but may be just that. The iPad launched just a few months ago and hasn’t launched in all International markets in the world yet. The other question is that do we need smaller iPads when the current iPad is good enough users? The price of an iPad with OLED display would also be greater than the current iPad. Add to the facts that Apple refreshes product lineups on an annual bases, has just introduced Retina Displays on iPhone 4 ( to complete with OLED displays ) and that smaller iPads would just kill the iPod Touch market, these rumors don’t seem to have much weight to them.
[via macrumors]