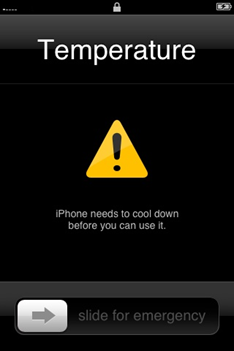 There has been various news about iPhone 3G S overheating, to the extent that the white iPhone 3G S turns pinkish in color. Apple has simply described the ideal operating temperature for the iPhone which is between 0º and 35º C (32º to 95º F). Anything lower or higher could shorten battery life. Also, the iPhone should be stored in a place where the temperature is between -20º and 45º C (-4º to 113º F). The symptoms for overheating are described as below:

All this is done so that the iPhone can return to an acceptable operating temperature. Emergency calls can still be made in when the Temperature warning screen shows up. iPhone 3G S or 3G might overheat due to the following activities:

So be careful before putting up an overheated iPhone in your pocket, it could burn valuable goods. It’s strange to see this warning pop up after more than a year for the iPhone 3G and not earlier. I have yet to personally find out any case of the 3G heating up, but the iPhone 3G S has become quite popular for the heat up issue, and a lot of queries from search engines to this blog confirm that. Whatever it is, be careful while using the iPhone 3G S in heated environments. Better to be safe than sorry.