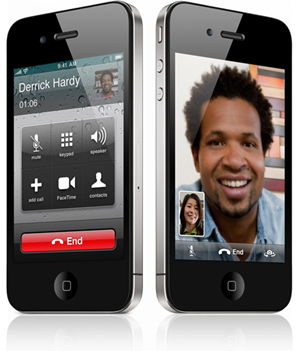 FaceTime is the new video conferencing feature in iPhone 4, that works between 2 iPhone 4 only. It’s based on open protocols, works via WiFi and is totally free. While that’s a good thing, one might wonder how much battery time can you can out of a FaceTime call. iLounge has run some tests on how much battery life does FaceTime use.

Here’s what they came up with.

Three hours and 10 minutes, give or take a little, from a completely charged iPhone 4. That’s via Wi-Fi, as compared with a promised 7 hours of voice-only talk time over 3G, and 10 hours of standard data time over Wi-Fi—the difference is attributable to iPhone 4’s camera, mics, speaker, video and audio encoding and decoding capabilities all being used at the same time. Note that we tested two iPhone 4s on this one, seeing average battery consumption of 30% per hour, with slightly lower consumption when there wasn’t as much change in the outgoing video image.

Around 3 hours and 10 minutes compared to 7 hours of voice calls over 3G and 10 hours of standard data time over Wi-FI. Not bad.