Microsoft has launched a new ‘Browser for Better’ campaign aimed at

feeding the hungry in America. For every download of Internet Explorer 8 from the Browser for Better website, Microsoft will donate 9 meals to ‘Feeding America’ which is the America’s leading domestic hunger-relief charity.

For those thinking that this move is just to promote Internet Explorer 8 rather than to help people, the download will count only if it’s done from the Browser for Better website, not through Windows Update or Microsoft Downloads or any other source. This act of charity by Microsoft should be followed by other giant companies like Google and Apple to show support to their customers and their fellow country men who have been hit by recession.

The campaign has been launched with an advertisement series that promotes Internet Explorer 8 features such as Web Slices and Accelerators. The ads are very similar to Bing’s as they show disorders such as F.O.M.S. or Fear Of Missing Something like the Search Overload syndrome shown in Bing ads.

Vicki Escarra, the CEO and President of Feeding America says:

This summer, millions of families throughout the U.S. are living on the brink of hunger. Demand for food is higher than it has been in decades. The Browser for the Better campaign is both raising awareness of hunger and giving people an easy opportunity to help their neighbors at no cost to them. It’s a win-win arrangement for Microsoft, Feeding America and people all across the country,

The Browser for the Better campaign is all about making it easy for people to make a real difference. Not only are they contributing to their community, they’re getting a more secure, modern browser designed for the way people browse the Internet today. 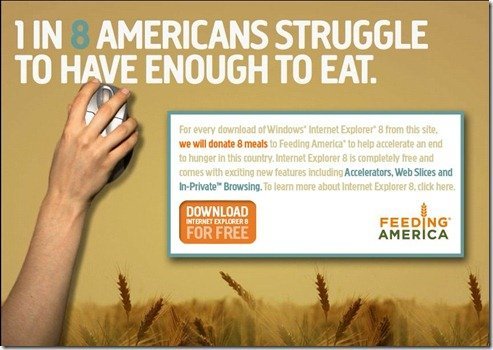