Cyrus Installer is a new entrant in the busy market of Cydia alternatives for iOS that you let you install tweaks or apps without the need of a jailbreak. The tweaks available in Cyrus Installer are similar to what you find in Cydia. They either add functionality to existing App Store apps or enhance the iOS experience. The type of apps range from emulators to entertainment apps as well as social media apps with additional functionality like support for downloading content. 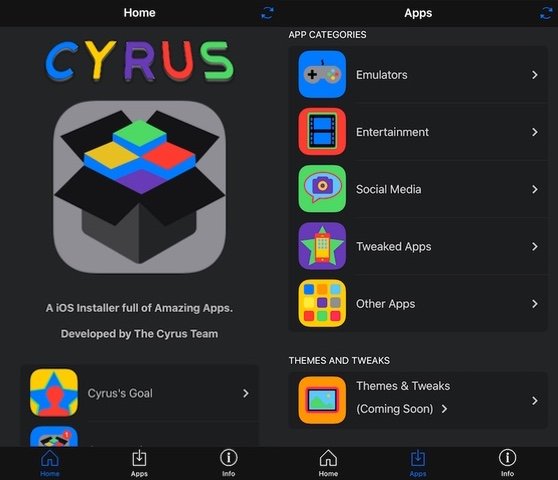 The benefit of Cyrus Installer as compared to alternatives is that it provides a very clean and minimalistic experience. There are no annoying full-screen ads, no subscription requirements or any sorts of videos. The platform runs on donations by community members and non-intrusive ads that can easily be ignored and do not ruin the user experience.

There are over 80 apps available in Cyrus installer at the moment. The current selection of tweaks and apps includes gaming emulators, entertainment apps, tweaked social media apps as well as two categories names ‘tweaked apps’ and ‘other apps’. Themes and customization tweaks for iOS are listed as coming soon. Another feature called ‘app suggestions’ will also be added where users can submit app ideas. If the ideas are feasible, the community will add them to the platform.

Cyrus Installer can easily be downloaded and installed by going to cyrusinstaller.com Once downloaded, allow permissions to its profile and the app icon will be placed on your iOS home screen. Launch the app and you can find a list of app categories from where you can download the apps or tweaks. The app clearly marks the apps which are known to work fine as well as those which do not download so you know which ones to avoid. Apps which need a workaround or Airplane mode to work are also marked as such.