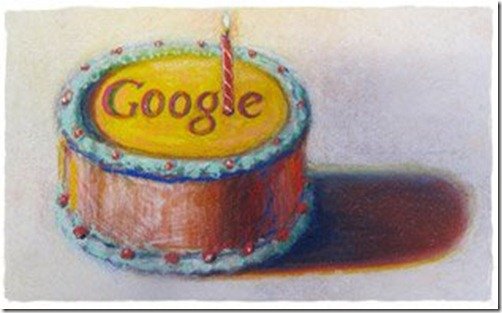 Google is celebrating today, September 27, as their 12th anniversary with a special doodle. The doodle is a pretty birthday cake with a candle which replaces the ‘L’ in Google. Google has been the dominating search engine in the world, since forever it seems.

Google has been a success story as great as Apple or Microsoft’s. It wouldn’t be wrong to say that Google has shaped the Internet as we know it today. Google was created on September 4th, 1998 in Silicon Valley, California, by Larry Page and Sergey Brin. The search engine was officially launched on September 27th.

Some of Google’s biggest acquisitions have been the following: In October 2006, Google bought YouTube, another service that changed our online as well as offline lives, for 1.65 billion U.S. dollars. In April 2007, Google bought DoubleClick, a company specializing in Internet advertising for 3100 million dollars.

In September 2010, Google implemented “Google Instant Search”, a feature that allows to search as the user is typing the search term.