According to MacRumors, Hasbro is working closely with Apple to launch a revolutionary new device called ‘My3D’ which would allow viewing 3D images and movies on an iPhone or iPod Touch. This new peripheral would bring users the ability to view 3D content in a unique 360-degree field of view. The device somewhat resembles a pair of binoculars and also has a slot for inserting an iPhone or iPod Touch. 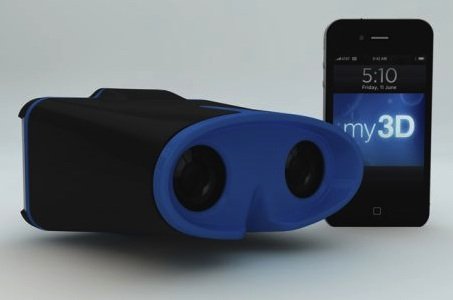 My3D promises to offer a unique experience not previously available by releasing 3D apps specifically for the new peripheral, according to the manufacturer Hasbro. These 3D apps would include different categories such as gaming, travel and entertainment apps. Hasbro has also partnered with the film industry giant, Dreamworks Animation to develop 3D material for the device.

With over 125 million iPhone and iPod Touch users around the globe, Hasbro is hoping that the My3D accessory will be big hit and is sure to help these iOS devices maintain their popularity in the world of gaming. Since Nintendo is also ready to launch their 3DS handheld gaming device next year, My3D would also make iPhone and iPod touch more competitive in the 3D gaming market.

Even though it’s not clear at the moment just how gamers would use the device and also have access to the touch screen during game play, but it sure seems to be an intriguing device. Good news is, it will be available for mere $30 starting next spring. Well, enjoying 3D content couldn’t get cheaper than this, could it? Tell us what you think in our comments section below