iFixit have launched replacement battery kits for MacBook Pro with Retina Displays. These kits are for models release from late 2012 to mid 2015. MacBook Pro is well known for being difficult to repair and upgrade by third parties. If a MacBook Pro battery wears out, Apple replaces it for $199 but that it kind of expensive. iFixit’s replacement kits start from $89.95 and go up to $109.95, depending on your MacBook Pro model year. This is still almost 50% in most cases, compared to what Apple would charge for battery replacement.

While it might seem that in it took a long time for replacement battery kits to come out for old MacBook Pro models, it was a challenging task for iFixit. It required a lot of trial and testing to undo the glue that keeps the MacBook together. Heat was one option but it was harmful to not only the material, but also unsafe since it could cause the battery to overheat and explode. iFixit finally came up with a solution by using a blend of household chemicals which are safe to use. The solution is applied to the sides of the battery which weakens the adhesive used by Apple to glue the battery to the surface. 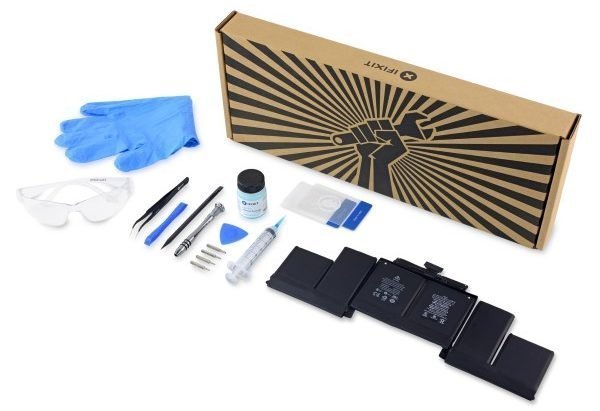 Even though the kit exists, the repair job is by no means a walk in the park. It is only meant to be done by people who have experience in taking apart electronics and putting them back together. All this has to be done while making sure that all the parts stay intact, the battery does not get damaged and neither do other internal electronic parts.

From the iFixit blog:

If you’re up for a challenge, and you want a computer that’s back in fighting shape—then swap out the battery of your MacBook Pro Retina. If you’ve never fixed electronics before, try this with a friend who has. Having extra hands comes in handy. Either way, we think the repair is worth the effort—especially if the alternative is discarding the laptop for a new one. A new battery makes all the difference in the world for a laptop’s usability: namely, up to 2-3 more years of battery life. And that’s pretty awesome. Plus, you can say you did it yourself.

The battery fix kit includes a replacement battery, a number of tools to open the machine, an adhesive remover solution and safety glasses and gloves. You can buy the MacBook Pro Retina battery kits from here. You can also purchase the battery, without the kit, which is considerably cheaper than buying the complete kit. This is only a good option if you already have the tools and adhesive to open the MacBook Pro and remove the battery.