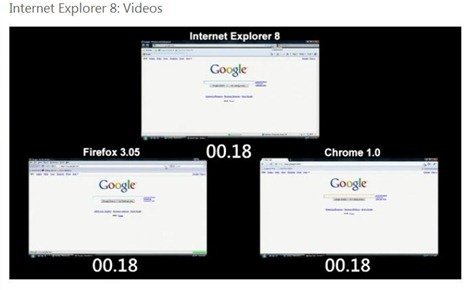 Microsoft has posted a video on the Internet Explorer 8 website which boasts about the speed of Internet Explorer. Shockingly, it proves to be 1/3 faster than Chrome and 3 times faster than Firefox ( all stable released versions ). They’ve done testing by using a stop watch. The video is indeed interesting to see. Although I would have loved to see a test of Facebook and other such websites, but I’m still a happy user of Internet Explorer on Windows 7 build 7057. The experience has raised up a whole new level since RC 1 of IE was released and I actually started using it again.

The source video isn’t embeddable for now, so you’ll have to click the image to go to the video. Personally, I’ve found Chrome to be the fastest, thanks to its JS crunching speed but remember that experiences may vary, since browsing speed depends on many different factors.