If you’re buying the iPad 2, there’s a lot to be excited about. A new A5 dual-core processor, faster graphics, a choice between black and white, and it’s much thinner. Unfortunately, the newly installed camera was left off of that list. It turns out that the iPad 2 camera hardly competes with the Samsung Galaxy Tab and the Motorola Xoom when benchmarked. Here are the results:

Macworld ran a benchmark test using the Apple iPhone 4, Motorola Xoom, Samsung Galaxy Tab, Apple iPod Touch(4th gen), an Apple iPad 2, and a Canon Powershot S95. In the still images, the iPhone 4 beat out all the tablets, taking second only to the Canon Powershot in image quality. The Xoom and Galaxy Tab took third and fourth, respectively. The iPod Touch took fifth, and the iPad 2 was given the lowest score of them all when it came to still image quality. 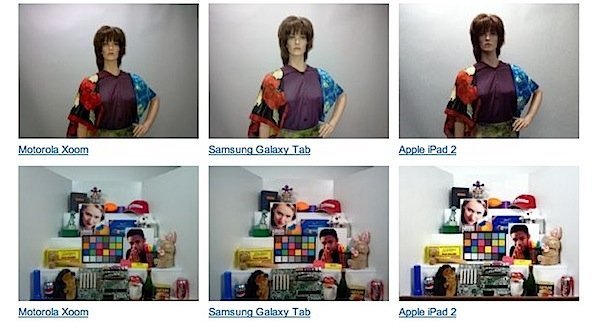 When it comes to video, the iPad 2 performed much better. In this benchmark, the Cisco Flip Video HD was added to the roster. The Canon Powershot took first yet again, followed once more by the Apple iPhone 4. Like the Powershot and iPhone 4, the Motorola Xoom took third for a second time. This time, the iPad 2 took fourth, ahead of the fifth place Flip Video HD. The Samsung Galaxy Tab finished last, behind even the iPod Touch. The biggest downside to the iPad 2 was that the audio capture was the weakest of all the tested devices.

While the iPad 2 camera didn’t perform exceptionally well overall, the likelihood of someone carrying something as big as the iPad for taking photos is very slim. Nearly all(if not all) cell phones have cameras now-a-days, and many of them take decent photos at a fraction of the size and weight of the iPad 2. The most likely use of the camera is for video conferencing, something it would do fairly well. What do you think? Had the iPad 2 camera been better but cost extra as an add-on, would many people have paid extra for it?

You can read the original Macworld article here.