Looks like there’s some bad news for iPad 3G users. Although the iPad 3G has an added advantage of you roaming around without staying within a specific wifi hotspot but AT&T doesn’t allow streaming videos in some apps, how uncool is that! 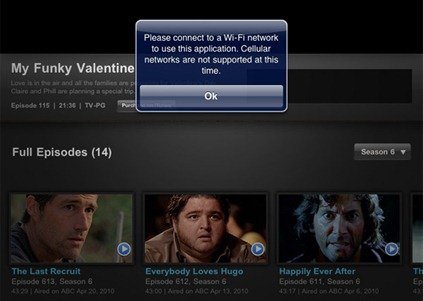 You spend $130 over the regular wifi iPad to see this message (above) on a 3G network, that’s just not right! Other than that if you’re paying $29.99 to AT&T for the unlimited monthly Internet plan and still you’re getting this message, not cool.

9 to 5 Mac is reporting that people aren’t able to watch ABC shows on the move via 3G, or the videos they can watch are quite downscaled. The iPad wants you to be under a wifi hotspot if you want to view the videos, for some people that might be a waste of money that they waited for the iPad 3G and they’re getting an error message that they can’t stream the video on a 3G network. Please AT&T or Apple, fix this issue, what’s the whole point of having an iPad 3G? The iPad 3G is all about mobility, and the feature which allows you to take your internet anywhere. Downscaling the videos on the iPad really takes away the whole video experience the user should get, and the streamed video won’t take advantage of iPad’s brilliant 9.7 inch LED display. AT&T should really work it’s way around this otherwise they’ll surely face an angry mob of people outside their offices. We believe 3G speeds are more than enough to stream a high definition video, so there isn’t any reason for blocking out video content from different apps from the iPad. But, if they’re taking this into account that people will start using up too much bandwidth while streaming videos, then why the “unlimited data plan” for the iPad 3G? [via 9to5Mac]