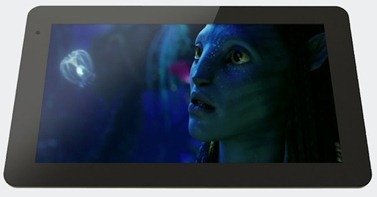 Surely you might not have heard about it, it was announced a week ago, some people like to call it the other tablet, as it didn’t have an impact as the iPad had. What’s interesting though is that the JooJoo saw an increase in orders after the iPad announcement. Fusion Garage CEO Chandra Rathakrishna said that the production of the 12-inch tablet has started and that the product is going to ship by this month.

Fusion Garage teamed up with OEM CSL Group of Malaysia, which will be manufacturing the tablet, in exchange for “low single-digit” percentage of the product revenue.

Chandra still hasn’t announced what’s powering the device, but he was happy to confirm that the tablet will support Flash at launch, and HD Flash content once Flash 10.1 is officially released. YouTube HD will play right now using a player plugin that takes advantage of GU acceleration.

Fusion plans to launch a web store, that will allow people to find some web applications on the JooJoo. Chandra also criticized the iPad, “Imitation is the greatest form of flattery.”, and he also mentioned Steve Jobs calling the iPad a “magical product”, while “juju” is an African word for “magical”. We’re very excited to see what the JooJoo can do upon release.

Apple introduced the iPad on the 27th of January. The iPad made a huge impact. Heck, even rumors made an impact. I bet in the next 2 years, tablets will be the whole rage, different brands, different specifications, different functions, etc…

It’s not like everyone is going to let Apple get away with a big tablet market share, everyone wants to take part, one way or another.

The question is, do they have what it takes to be better than the iPad? All we could do is wait.