Apples’s latest Mac Book Pro with Core i7 processor was tested by pcauthority during a review and they found some heating issues with it. According to their tests, Core i7 Macbook Pro hits temperatures over 100 degrees Celsius which is a lot for a laptop and with this temperature nobody would use it on their laps unless they’re willing to harm themselves. 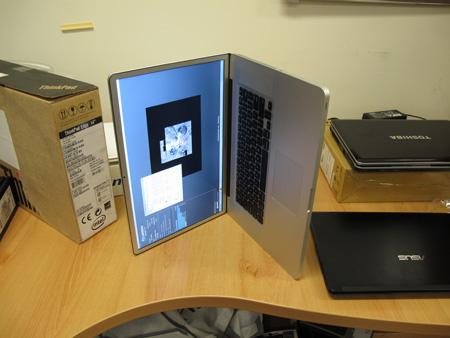 It looks like Apple’s cooling system is not good enough to provide sufficient cooling to their Core i7 processors. The CPU and GPU both are of huge energy outputs and the metallic body of the laptop is also a big factor in heating problem. That’s what pcauthority said about the test results of Macbook Pro:

During testing of the latest Core i7-620M based 17in Macbook Pro we noticed that there were problems running certain tests in our benchmark suite. The score being spat out for the Photoshop tests – fourth in a suite of six test applications – in particular was quite low, and we wondered whether it was down to heat issues. When the test was then successfully run as a standalone test with the Macbook sitting on its side, unibody base exposed to the air, we suspected that the Core i7 was struggling within the Aluminium shell of the Macbook.

They think that the design of the Mac Book Pro is not capable with the sheer heat output of Core i7 processer. The Fujitsu Lifebook had a temperature of 80 degree Celsius in the same test. This could be a problem with only some Macbook Pro units and not all of them so we should wait for Apple’s response on this.