Not much is known about Windows Mobile 7 at this point. The most recent update has been from Stephen Chapman on Microsoft seeking testers for Windows Mobile 7 Search and Browser teams. I recently stumbled across this interesting patent based on messaging system controllable by gestures. Microsoft applied for a patent for Controlling an Integrated Messaging System Using Gestures which says:

In layman terms, Microsoft wants to or has developed a system for touch based or optical based gestures for use with communication systems ( mobile or tablet PCs ) in which the WIMP (windows, icons, menus and pointer) interface is unsuitable to use. These gestures aren’t limited to just taps and drags but also the user’s hand or an object may be used for gesture recognition on a touch screen. It can also change the UI based on the type of messages ( voice, email, sms etc ) and the type of gesture applied. The gesture recognition wouldn’t be restricted to just a touch screen either, but includes optical sensing technologies too.

The touch sensitive display 101 may comprise any display which enables detection of finger or hand gestures and may use any suitable technology, including but not limited to, capacitive, resistive and optical sensing technologies…

From last year’s CES, a few Windows Mobile 7 screenshots were leaked from an internal Microsoft document. If you care to check them out, you’ll realize Microsoft really wants to take gesture support to the next level via touch interaction, shakes and also camera based recognition. 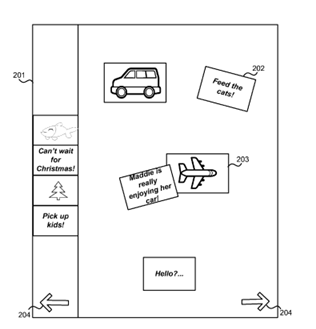 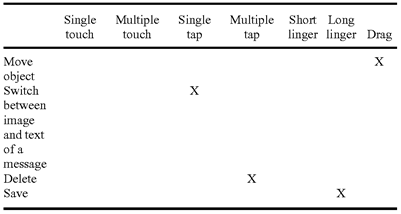 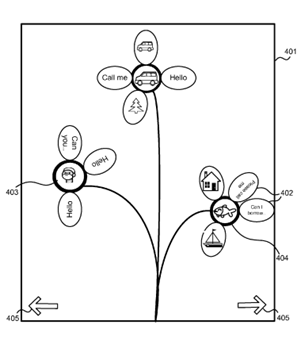 Where would this system be applicable? Although current generation mobile devices provide a certain level of gesture support, I’m certain Windows Mobile 7 would focus on expanding these gestures. But the visualizations mentioned in the application (shown above) seem more practical on a large screen such as the Surface, Tablet or a display using Project Natal. The patent application has a better say on this:

The systems and methods described above provide a display system for messages received which is suitable for use in any environment and in particular in environments where WIMP interfaces are not available or appropriate. This may include the home environment (e.g. in the kitchen), hospital environments (where a WIMP interface may provide an infection risk), harsh environments (where WIMP interfaces may be impractical), mobile environments (e.g. on mobile phones, tablet PCs, PDAs) etc. Another example is a multi-user environment (such as in a school, business or emergency situation) where each user’s time using the system is limited and therefore lightweight interactions through finger gestures may be appropriate. A further example is where messages need to be triaged by a number of different criteria, each of which can be shown in a different visualization, e.g. in the control center of the ambulance service or other emergency service where messages (which may be incoming telephone calls) can be triaged by priority and/or by the location of the sender.

Interesting times ahead. Until Microsoft reveals more details for Windows Mobile 7, we can hope this would be one of the included features. :)