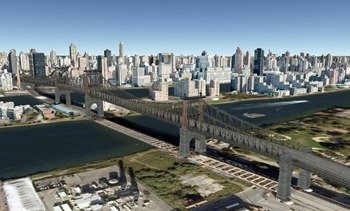 The title might be confusing, but I find it interesting that as soon as it was found that a highway overpass will be built to connect Microsoft’s one campus with the other, Google announced their 2009 Student Bridge Modeling Competition.

Are you in awe of the engineering that goes into designing a bridge? Do you have a favorite local, famous, or historical bridge you’d like to see in Google Earth? Now you have a chance to show off your modeling skills and make that dream a reality by entering the Google SketchUp International 2009 Student Bridge Modeling Competition. Simply model the bridges of your choice in Google SketchUp, geo-reference them in Google Earth and submit them by uploading to the Google 3D Warehouse to earn lasting online glory and, for the winners, a handsome prize.

Not that both these announcements have connections, but interested contestants could try modeling the bridge that Microsoft plans to make, just for the fun of it. Here’s a little background information on the ‘Bridge to Microsoft’ by Bloomberg:

Local planners allotted $11 million of $214 million awarded to the region to help pay for a highway overpass in Redmond, Washington, connecting one part of Microsoft’s wooded campus with another. The world’s largest software maker will contribute almost half of the $36.5 million cost. Other federal and local money will pay the rest.

Work is scheduled to begin by June, while larger projects in the area await funding, including replacing an elevated highway in Seattle damaged by a 2001 earthquake and a bridge over Lake Washington at risk of cracking in a windstorm. Spending watchdogs and even some Microsoft employees see more pressing needs.

Since Macs were used to design I’m a PC ads, I think Microsoft wouldn’t mind using Google’s tool to help build the bridge either. Jokes aside, I think this would be a good entry for Google’s contest to design the ‘Bridge to Microsoft’.