TechFest is an event where Microsoft’s researchers from different locations around the world meet in Redmond and share their work with other Microsoft’s employees. It’s been revealed that Microsoft is planning to show a new “Mobile Surface” at TechFest 2010.  The main purpose of Mobile Surface System is to link mobile phone with a camera and a projector so that users can interact with a screen projected onto a tabletop by moving their hands in the air above it. 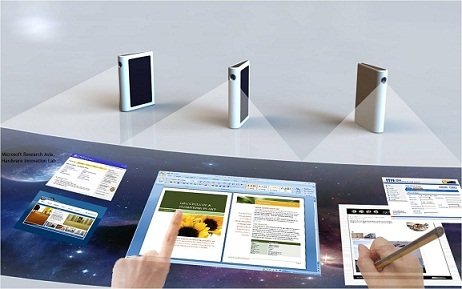 Microsoft’s Research site said, “Our goal is to bring Microsoft Surface experience to mobile scenarios, and more importantly, to enable 3D interaction with mobile devices. We do research on how to transform any surface (e.g., a coffee table or a piece of paper) to Mobile Surface with a mobile device and a camera-projector system. Besides this, our work also includes how to get 3D object model in real-time, augmented reality and multiple-layer 3D information presentation.”

The information about Mobile Surface has been removed from Microsoft’s research site but the information can be seen though the Google cached version of the website.

TechFlash has also posted a video about Mobile Surface system which was recorded during TechFest preview for a group of reporters and bloggers.