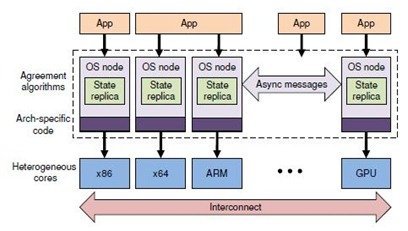 Microsoft Research in Cambridge has teamed up with ETH Zurich Systems group to work on a new research operating system called Barrelfish which is being designed from the ground up, to cope with the demand of increasing number of processing cores, as well as the diversity in computer hardware. This is no the first time that Microsoft is working on a research operating system. Singularity was another research based operating system, the code of which is available for download on CodePlex.

The aims behind Barrelfish according to the official website running the OS itself are:

We are exploring how to structure an OS for future multi- and many-core systems. We are motivated by two closely related trends in hardware design: first, the rapidly growing number of cores, which leads to a scalability challenge, and second, the increasing diversity in computer hardware, requiring the OS to manage and exploit heterogeneous hardware resources.

Barrelfish has been in the works since 2007 according to Mary Jo Foley. The teams working on Barrelfish have just released a preview version of the operating system for testing purposes which can be download here. Currently this prototype can do the following:

–Runs on emulated and real hardware