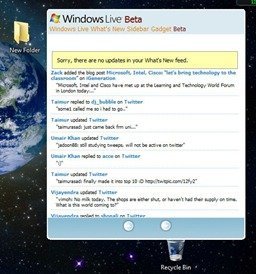 So, finally there’s a new gadget published by Microsoft for Windows Live ‘What’s New’ feed, and it’s not the best of efforts I have to say.

The gadget is plain, and looks like it’s from the 90’s. Unlike the what’s new feed in Windows Live, the gadget doesn’t show user thumbnails or web page images. It also seems very rough around the edges. It doesn’t even look it’s part of Windows Live! And when you undock the gadget, it enlarges exponentially. I’m all up for having access to information at the tips of your fingers, but this is the least innovative way to bring it close. If you use Windows Live Messenger, you won’t need this gadget at all, as messenger provides a much better ‘What’s New’ feed at the bottom of the main window.

It might not be pretty, but at least it does what it says. I was expecting a better one like the Soapbox gadget, which is actually awesome.

Also, I had heard they’ll be releasing a messenger sidebar gadget. A hotmail gadget would be very welcomed as well. Microsoft should just look at what Google is doing with its Gmail and Google Docs sidebar gadgets, and how its leveraging its own sidebar platform. Even the gadget offered for Microsoft Office are useful enough, but sadly Microsoft doesn’t provide a great ‘gadget-y’ experience with Windows Live. There used to be a very useful Windows Live Search gadget but it’s missing from the gallery. A Traffic by Live Search Maps gadget is still up though.

A feature in Windows 7, sidebar gadgets can be installed during an application’s setup to improve the user experience. Although, it can happen in Windows Vista as well (try using Norton AV Gamer Edition 2009, it comes with a gadget), Microsoft should really make some great new gadgets for Windows Live and Windows 7 to keep us interested in the sidebar.