Don’t you just love the stacks feature in Apple’s OS X Dock? It would have been great if Microsoft could implement such a feature in the awesome new Windows 7 superbar, but sadly, that’s something we can only dream of since it’ll be called a rip-off. But if you really really want a stack in your superbar like the one in the image below, read on. 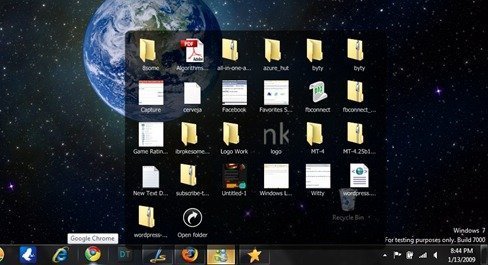 First of all, I should make it clear that due to the current design of the new superbar, you’ll be able to run only one stack at a time. Although there’s a workaround for that, it’s not really that good.

Head on over to Chris’n’Soft and download StandaloneStack. (Although it doesn’t say it, but it runs perfectly fine on Windows 7) This nifty little application lets you create stacks wherever you can place an icon. Just make a shortcut to the application, and shift + click the shortcut. That’ll open the settings for that stack. 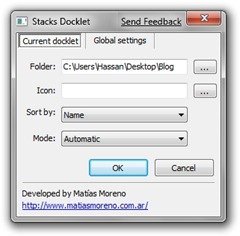 Here, you can select the folder that you want to show in the stack contents, the icon, sorting method and fan or grid mode. After you’re done, drag the shortcut to the taskbar and voila! You have your very own stack in Windows 7 superbar. But, as mentioned earlier, you can only create one stack at a time. Here’s a workaround for that: create lots of stacks and put them all in a folder. Right click on the taskbar, and navigate to Toolbars > New Toolbar. Point it to the folder that you filled with the stacks with. It might not be the prettiest way to access your stacks, but it does work. You can shorten the toolbar name to regain space for your Window buttons on your taskbar. 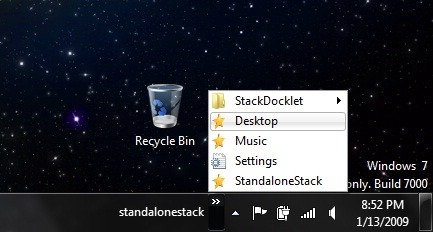