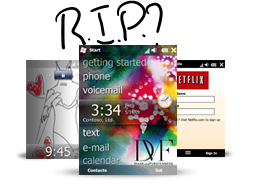 If you had believed that Microsoft’s support will keep Windows Mobile 6.5 alive and running alone – think again. Other companies aren’t willing to invest time and money in an operating system that is being treated as a second class citizen by Microsoft itself. Adobe has announced that they have dropped Flash 10.1 for Windows Mobile 6.5 in favor of Windows Phone 7 Series. Now this is also good news for those who thought we will never have Flash in Windows Phone 7 Series, but bad news for all those who are sporting their WinMo 6.5 devices.

Here’s what a representative had to say over at the Adobe forums (via WMPoweruser):

You can expect the final release for Android to be available mid-year. All Android devices that meet our minimum s/w and h/w requirements will be supported. Unfortunately, I cannot say a lot more publicly about our port to the Android platform at this time.
As for WinMo, we have made the tough decision to defer support for that platform until WinMo7. This is due to the fact that WinMo6.5 does not support some of the critical APIs that we need.

Yes, blame it on the APIs. After promising a Flash 10.1 release for WinMo 6.5, now they realize that it doesn’t support some critical APIs. You can believe this pile of BS if you want, but the fact is that WinMo 6.5 is going to fade away, towards the white light, where older Windows Mobile versions live happily ever after.

Skype has also discontinued their app for Windows Mobile 6.5, because they want to provide a superior experience to their users, similar to what the iPhone provides. Doesn’t that spell out Windows Phone 7 Series?

We’ve chosen to withdraw Skype Lite and Skype for Windows Mobile because we want to offer our new customers an improved mobile experience – much like the version that has proved so popular on the iPhone, and which is now available on Symbian phones.  Our focus is on providing a rich user experience that allows you to enjoy free Skype-to-Skype and low cost calls as easily on the move as you do at your desktop.

We felt that Skype Lite and Skype for Windows Mobile were not offering the best possible Skype experience.

Join our Facebook fanpage to stay up to date with all about Windows Phone 7 Series and Windows Mobile 6.5