Adobe has released Adobe AIR for the Android Market opening doors for developers wanting to built apps with Adobe’s developer platform. This release will give developers and Android users a completely new channel of apps. Your handset should be running Android 2.2 Froyo if you want to be able to download AIR. 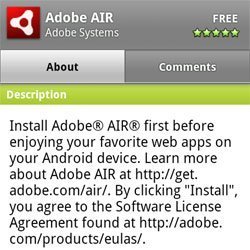 Adobe’s Application Evangelist, Ryan Stewart, gives a complete how-to on publishing AIR apps to the Android Market. Adobe Labs also gives some video demos. Users should be able to download apps via the Android Market and they should load like regular apps if you have AIR runtime installed. [Via TechCrunch]