Today is John Lennon’s 70th birthday and Google has dedicated its homepage to him like it has done before for many other famous people. But it’s a Google’s first today because today’s doodle is an embedded video. Its a simple animation with Imagine playing in the background. ‘You may say I’m a dreamer. But I’m not the only one.’

As Gizmodo hoped, the logo should have appeared internationally on Google’s homepages, keeping alive the message behind Imagine – world peace. It’s appeared on google.com.pk, has it appeared on your Google search page? Check out the video below. 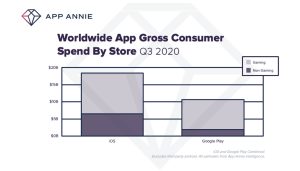 The latest report on consumer spendings by an apps analyst, App Annie states that global…