Most Apple fans would not be excited about Apple TV as they are more interested in devices like iPhone, iPad and iPod touch. But still, the new version of Apple TV is better than its previous version. It will also attracts more people because of its low price and some new cool features. So, today a report by Barron stated that JMP Research analyst Alex Gauna has found out that new Apple TV is selling out around the U.S Apple stores at a good pace. They further estimate that the device would have sales of 1 million units every quarter. 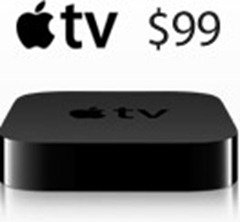 This year, Apple first launched the iPad in April which had great sales starting day one. After iPad, Apple launched iPhone 4 which again had remarkable sales just like iPad. Then came the iPod touch in September and just like the other two iOS devices its sales might pass its previous figures as it has some new features compared to its previous versions. With these amazing iOS devices, Apple TV is also selling at a reasonable pace and Gauna believes that Apple can sell 1 million units in a quarter. Well if this prediction is true, then Apple TV would cross the sales of previous Apple TV soon.

New Apple TV has been available for only a week and currently Apple is shipping it in 1-2 weeks, so we can’t estimate the correct demand of the device in these early days. The device is available for $99 which is a good deal for its new features.