In case you’ve been unhappy with the laggy performance and delayed rollout of Froyo for Galaxy S by Samsung, the silver lining has been revealed. A super fast, lag free build marked Android 2.2.1 i9000XXJPU has been leaked which fixes much of the issues people used to complain about previously. Gone are the days when you needed to install a lag fix just to make the phone useable under heavy load ( a lot of people will still say that a lag fix is needed, don’t listen to them ). 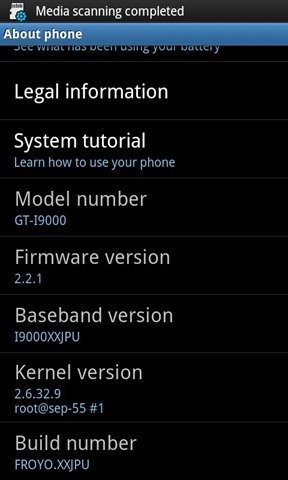 Anyhow, here’s the list of changes in this new leaked build via XDA Developer forums:

I can personally confirm the GPS improvements in case you’re wondering. I don’t use GPS for driving though so it might still be problematic but checking in with Foursquare seems a lot faster now. Small but useful UI changes are also visible throughout the ROM such as all alphabets now show on the side in the contacts app. The camera app also shows a thumbnail preview of the last picture taken now.

I’ll be doing a more thorough review of this build in a video soon as well as a complete walkthrough on how to install it using Odin. But in case you’re an advanced user and know how to install it, I suggest you upgrade now.

P.S. no word yet on when Samsung officially decides to push 2.2.1 out to users but we’re hearing Q1 2011 before a Gingerbread release later. Fingers crossed.

P.P.S. a big shout out to SamFirmware who have been posting these Galaxy S ROMs. Follow them on Twitter!