Apple has finally updated its in-app purchase system by allowing users to share paid in-app content with family members. The company announced the change at the WWDC 2020 event in June. Now the sharing option is available to iOS 14 and macOS Big Sur developers and users.

Previously, users could only share purchased apps and subscriptions made via Apple ID through iCloud Family Sharing with up to 6 family members. 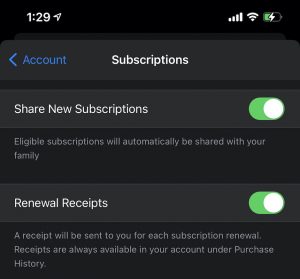 Users can share in-app purchases of compatible apps via a new toggle in the Settings app. Simply navigate to Settings > Apple ID > Subscription and enable the share feature. To give more control over which apps purchases to share, there is also an option to disable sharing for specific apps.

However, all apps do not support sharing of in-app purchases and subscriptions with family. It is reported that developers will have to “manually” allow Family Sharing on their apps via the App Store Connect portal. For now, users are notified of the compatible apps by an alert message.

In the latest iOS 14 update, Apple is opening its platform to new possibilities, not only for its native apps but also for third-party apps. The new Home Screen widgets and especially their customization freedom has been very popular since the release. For years, Family Sharing has allowed users to share their favorite Apple services, App Store purchases, iCloud storage, and family photos while saving money. And now with the inclusion of in-app purchases the company offering users more ways to share, enjoy, and save as a family.

Another money-saving option available by the Cupertino tech giant is the newly launched Apple One service bundles. Three different plans offer various Apple services for a discounted subscription fee which can be shared with up to 6 family members.