News Corp. CEO James Murdoch and Apple are collaborating on a newspaper exclusively for the iPad, according to a recent publication by Guardian UK. The project is called The Daily, and will be available to its subscribers for less than a dollar a week. It is scheduled to be launched by the end of this month as is being described as the world’s first ‘newspaper’ designed exclusively for new tablet-style computers such as Apple’s iPad. 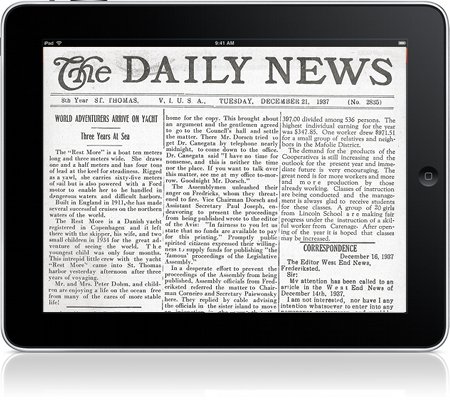 Apple has designed the The Daily newspaper app in a way that will sync content automatically to the subscribed iPads, according to Guardian, and there will be no “print edition” or “web edition” for the iPad exclusive publication. For The Daily project, News Corp has hired over a hundred journalists to write for the newspaper, which will be based on the 26th floor of the News Corp. building at 1211 Avenue of the Americas in Manhattan. The content on the Daily will be focused mainly on the US most likely a mash-up of the two flagship News Corp. publications i.e New York Post and the Wall Street Journal.

News Crop. executive is confident of this iPad publication to become a “game-changer” for the newspaper industry. He said:

” It doesn’t destroy the traditional newspaper, it just comes in a different form! “