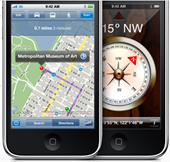 MacRumors have dug up a new job listing for an iPhone Software Engineer to work on the iPhone and iPod Touch Maps team to take the Maps app to the next level. And this is what Apple means by ‘next level’:

We want to take Maps to the next level, rethink how users use Maps and change the way people find things. We want to do this in a seamless, highly interactive and enjoyable way. We’ve only just started.

Some time ago, Apple had acquired a mapping company called Placebase, the CEO of which is now a part of the “Geo Team” at Apple. Couple this with the recent rift between Apple and Google over different matters, we could very well see Apple dumping Google Maps for the Map App on the iPhone for an in-house solution. And we know very well that Apple would only chose a better quality Mapping app to replace the current one, if it chooses to do so, since this is all just speculation currently.

Apple had only recently released enabled the MapKit framework to be used by developers in third party applications in the App Store with iPhone OS 3.0. The compass was also introduced in iPhone 3G S to improve the mapping experience along with GPS which was integrated in iPhone 3G for the first time. Apple’s commitment to mapping on the ‘iDevices’ is quiet serious, and with the foray of Google into free GPS based Maps Navigation with the Droid, Apple as well as other companies like Garmin are on a higher alert. Due to the level of secrecy around Apple’s product planning and announcement, only time will tell whether Apple provide their own mapping app or stick to Google Maps, or maybe provide Google Maps Navigation on the iPhone as well, which won’t be a bad idea. Who knows, maybe in the rumored iPhone 4G?