Apple Music’s one cent per-stream rate to artists is already higher than other music streaming services like Spotify and YouTube. A new proposal by British MPs calls for a ” “complete reset” of the music streaming market by splitting royalties 50/50 with artists, instead of the prevailing 16% share. And Apple does not agree with it.

After a six-month inquiry into music streaming, British MPs are calling for a complete reset of the industry to give artists a fair share. BBC reports that MP, who chairs parliament’s Digital, Culture, Media and Sport (DCMS) committee, Julian Knight said;

“While streaming has brought significant profits to the recorded music industry, the talent behind it – performers, songwriters and composers – are losing out. Only a complete reset of streaming that enshrines in law their rights to a fair share of the earnings will do.”

Popular artists like Mick Jagger, Paul McCartney, Melanie C, Wolf Alice, and Jessie Ware, who had asked the British PM to reform artists’ music streaming commission, call the new proposal a victory and are “overjoyed” by the findings. However, BPI, which represents the UK recorded music industry, cautiously said that;

Streaming was “enabling more artists than ever” to earn a “long-term, sustainable income” and that new policies should be properly examined to ensure against “unintended consequences for investment into new talent”. 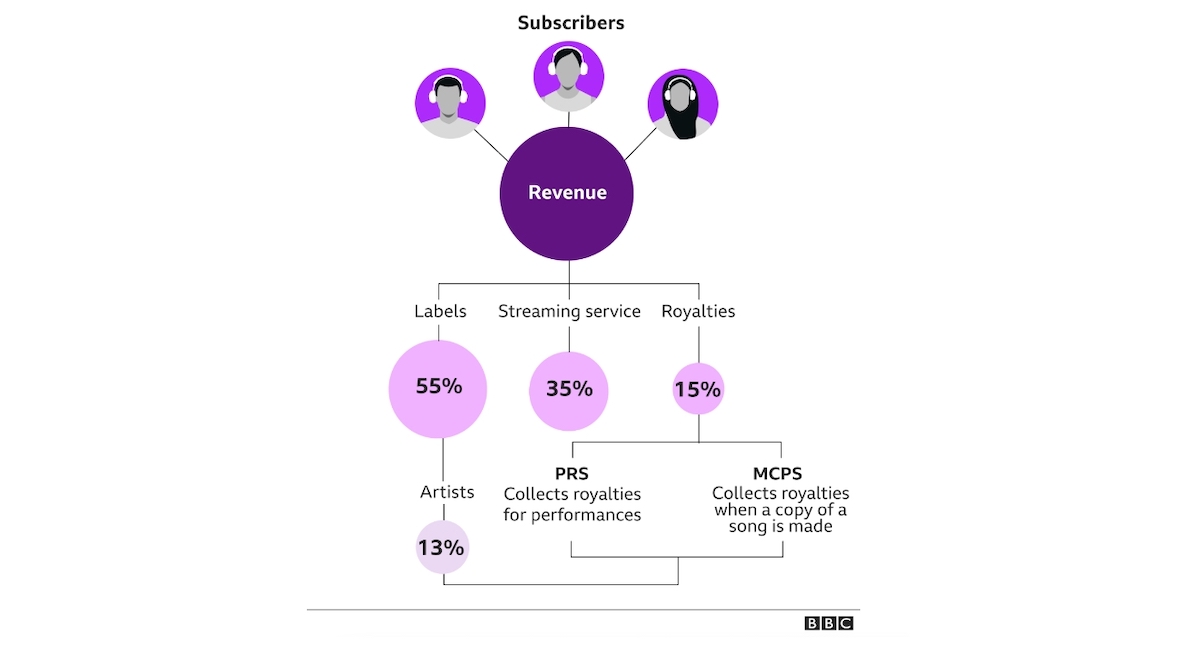 They largely argued to maintain the status quo, saying any disruption could damage investment in new music, and resisted the idea that streaming was comparable to radio – where artists receive a 50/50 royalty split.

“It is a narrow-margin business, so it wouldn’t actually take that much to upset the so-called apple cart,” said Apple Music’s Elena Segal.

In the report, YouTube stands out the most for the worst per/stream rate. Therefore, it faced the strongest criticism.

The streaming services themselves largely escaped criticism, but MPs said YouTube’s dominance was a cause for concern – citing figures that it accounts for 51% of music streaming while contributing 7% of music industry revenue.

They warned that users’ ability to upload music to YouTube without licensing it from record labels gave it an “unfair advantage”; and urged the government to introduce “legally enforceable obligations to normalise licensing arrangements” on sites that host user-generated videos, such as YouTube, TikTok and Facebook.

The streaming service that compensates artists the most fairly is a stationary bike company pic.twitter.com/DfuAEZUmhh

Other recommendations of the committee are centered on providing ease to artists, discouraging favoritism and transparency.