Apple is researching a way to a potential next-generation Apple Pencil with additional functions, such as the capacity to sample textures, that can sample colors from the actual world and then input those same colors onto an iPad. The functionality will also allow users to sample textures from the real world.

As reported by Patently Apple, Apple is researching a way to incorporate color sensors into the tip of a future Apple Pencil, allowing it to sample surfaces of actual things and determine their color. The Apple Pencil may have an integrated ambient light sensor, a light emitter, and a light detector that can identify the color and texture of a surface, according to images in the patent. 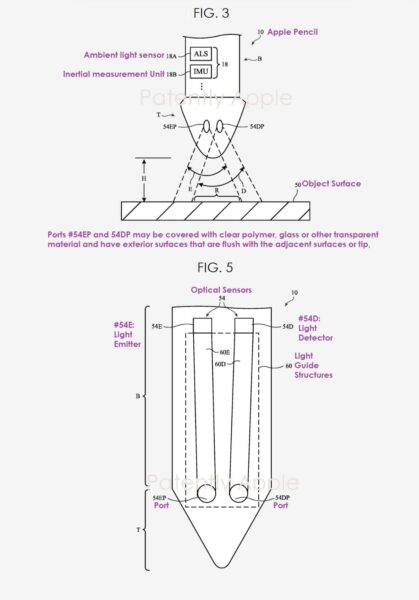 A color-detecting light detector with multiple photodetectors that each measure light for a separate color channel may be incorporated into the color sensor. A light emitter could also be present on the color sensor.

The light emitter could have a spectrum of light that is tunable. Utilizing data from measurements of the color of ambient light, the light spectrum could be changed during color sensing tests. It is also possible to use an arrangement in which the light emitter’s intensity is adjusted while detecting color.

Data recorded from the Apple Pencil may be wirelessly transferred to a partner device, like a tablet computer. From there on, users will be able to input the sampled color or texture into any drawing program or software.

As with other patents filed by Apple, it is important to note that the Cupertino tech giant files many applications for new technology on a weekly basis, so we do not know for sure if this technology will be implemented in the third-generation Apple Pencil.