A few days ago Apple released updates to these apps in the Mac App Store, but users who had it preinstalled or installed the software outside of the App Store could not get the newest updates. However, today Apple has released the updates through Software Update for the following programs: iWeb, GarageBand, iPhoto, iDVD, and iMovie. 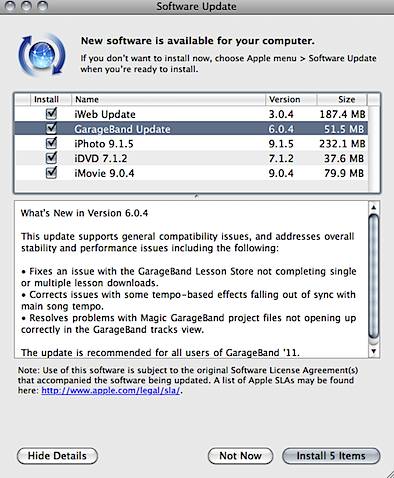 iWeb: This update for iWeb improves overall stability and fixes some other minor issues.

GarageBand: This update fixes general issues, stability and performance issues. There is a fix for the Lesson Store no completing single or multiple lesson downloads. It corrects issues with tempo-based effects falling out of sync, and resolves problems with Magic GarageBand project files not opening up correctly.

iPhoto: This update fixes several issues and includes performance enhancements. Changes made using Adjust Time and Date command now show up correctly. Issues with photo views not scrolling correctly has been fixed. Fixes a problem that could prevent animations from being applied correctly on photos. Deleting photos from a web album using the contextual menu now removes them from the album without deleting them from the library. And fixes an issue that could prevent a crop adjustment form being removed from a photo when using Revert to Original.

iDVD: Improves reliability of imported iPhoto ’11 slideshows. Fixes a problem that could prevent files from re-linking and fixes an issue that could cause iDVD to use all available CPU capacity when searching for missing files. This update also includes performance enhancements and other minor fixes.

iMovie: Now supports opening projects imported from iMovie and iOS. Fixes an issue where some audio adjustments were not preserved. Addresses a performance issue when using large quantities of video clips with keywords and resolves an issue with slow application launch when working with large libraries. This update also includes performance and stability updates as well.

Go check for downloads now and get updating!