Apple has released the fourth beta of iOS 6 to developers for iPhone, iPad, iPod Touch and Apple TV. Bundled with various improvements such as Apple’s own Maps app, improved Siri features, Facebook integration and much more, iOS 6 is yet another evolutionary step for one of the most popular mobile OS on the planet. Beta 4 contains some new improvements, some handy while one that might surprise you. 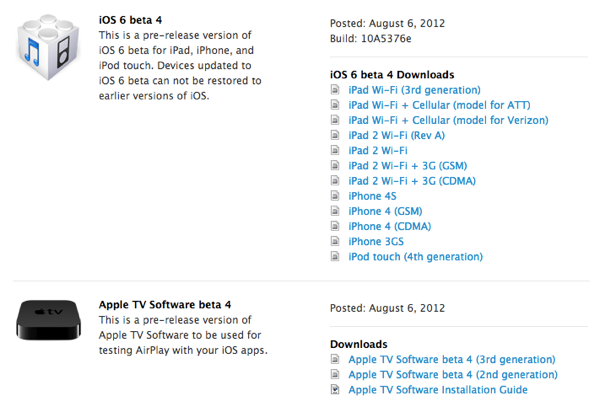 The major shocker: YouTube app has been removed from iOS 6 Beta 4. The reason for this has been given to The Verge by Apple as:

Our license to include the YouTube app in iOS has ended, customers can use YouTube in the Safari browser and Google is working on a new YouTube app to be on the App Store.

This means that the YouTube app would be removed from all iOS 6 devices while iOS 5 users would retain the stock app. Luckily, the Verge has also reported a statement from Google that they’re committed to providing the best YouTube experience for iOS users. Whether that means that Google is planning to release a YouTube app for iOS or just improve the web app experience is anyone’s guess. Having used the brilliant YouTube app for Android, we would bet that Google would have a YouTube app up in the App Store pretty soon. Also, let’s hope that Apple isn’t removing YouTube from Apple TV and Google would support AirPlay in their app else that would majorly reduce the functionality of the device for most users.

Other less shocking features in iOS 6 b4 include improved privacy settings with an entry for Bluetooth Sharing. The entry mentions that ‘these apps can share data even when you’re not using them’ – Could Apple be using this as their version of NFC along with Passbook? Intriguing.

The Maps app has improved performance and font rendering along with the addition of 3D views and mapping data for a lot more places. It still doesn’t compete with Google and we’re not sure it can in the foreseeable future, but Apple keeps on taking steps in the right direction with each beta release. Other noticeable features include the addition of new features in the Siri information menu. It now tells you about the new functionality that it has acquired in iOS 6.

Developers can go ahead and download the latest beta from iOS Dev Center right now or just update it over the air using the built-in software update feature in iOS.