Rumors, reports and leaks about Apple’s next iteration of iPhone have been making their way to the top of tech blogs from quite some time now. We’ve already witnessed some leaked pictures of Apple’s next generation of iPhone aka iPhone 5’s front and back panel.s When pictures failed to quench the thirst of Apple fans, Chinese replacement part suppliers leaked a couple of video reviews in which they compared iPhone 5’s exterior shell with the currently available iPhone 4S. The list of leaked pictures and parts goes on.

Today, folks over NE posted pictures of alleged iPhone 5’s nano SIM tray and infamous Home button. Note that Apple had successfully managed to get their new nano SIM standard approved by ETSI back in June earlier this year. There’s a significant size difference in iPhone 4S’ SIM tray and purported iPhone 5’s nano SIM tray. The leaked nano SIM tray is smaller than the tray which is being shipped in Apple’s current generation of iPhones. Apple has been working on squeezing things to make their next-gen iPhone slimmer than the 4S. Leaked pictures of the purported iPhone 5’s smaller home button reflect the very same philosophy. 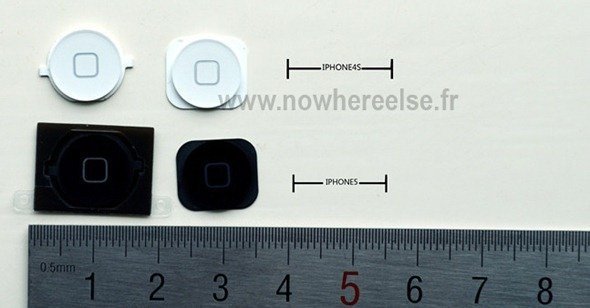 Presented as being designed to slip into the SIM card slot of the iPhone 5, this element seems in turn confirm that the next iPhone indeed adopt this new standard imposed by Apple. I take this article to drag other photos with us in passing a Home button which should equip the iPhone 5 and which is also slightly smaller than previous generations, details of which we heard last Friday.

Even though we’ve seen a lot of leaked pictures and replacements parts of iPhone 5 or “the new iPhone”, it is still hard to put weight on these leaked pictures. Apple’s 6th generation iPhone with a taller 4 inch display, smaller dock connector and slimmer form factor is due in the September-October timeframe later this year.

We will keep you updated on this, stay tuned!