According to a recent report by research firm Gartner, worldwide sales of mobiles devices have increased by about 13.8 percent from the same period in 2009 and the sales of smartphones have gotten a boost of 50% as compared to the second quarter of 2009. In last quarter, Apple was in seventh place in mobile phones manufacturers and in this quarter Apple is still at the same position although their sales have gotten some boost with the launch of iPhone 4. Apple is catching up to Motorola as Apple has a share of 2.7% as compared to 2.8% of Motorola. 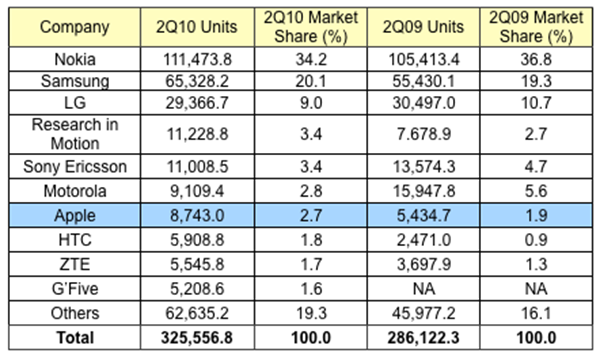 Nokia, Samsung and LG are still the market leaders as top three as Nokia has a big share of 34.2. HTC also got a big boost in their sales this quarter as they were not in top ten in the last quarter but now they are at eighth place just after Apple.

Apple still has a big share of 14.2% if we look at the sales of smartphones. Apple looks to be in a good position as the momentum of iPhone 4 will help them to further increase the sales in the remaining year providing there are no supply constraints.

Apple’s sales would have been higher if it had not had to face tight inventory management in preparation for the arrival of the iPhone 4 at the end of the second quarter of 2010. Apple also suffered from some supply constraint on the new device. We expect that a wider global rollout of iPhone 4 will sustain Apple’s sales momentum throughout the second half of 2010.

Looking at the share of smartphones operating systems, Android has gone past iOS as Android has a share of 17.2%. This is a big improvement for Android as just an year ago they had a share of 1.8%. Symbian is still at the top but its percentage is slowly decreasing in every quarter. RIM is at second place with its share of 18.2%.

It will be interesting to see Apple’s performance in the third quarter of this year as the company has just launched iPhone 4 and is continuing to launch it internationally.