iTablet or iSlate. No matter what Apple calls it when ( and if ) they release the mythical tablet that has been the center of attraction of the blogosphere, we’re all very sure that it’ll take the technology world by storm. Just like the iPhone, it would be something that would be ahead of the competitors ( if any ) by years. Speaking of years, even back in 1987, Apple had a concept for a tablet. Called Apple Futureshock “Knowledge Navigator”, the device and software looked way ahead of its time.

The Knowledge Navigator was smart. Operated mainly by voice, it featured a human looking animated character that acted as a secretary and did all the file searching and schedule organizing. The device had a touch screen as well as a web cam for video calls. Maps were also included in the operating system.

Now imagine all this technology integrated into a tablet with multi-touch, a better UI and hardware as well as entertainment capabilities. Who wouldn’t want to buy it? How will it make people use it instead of the iPhone or iPod Touch? That’s a question I’m trying to find the answer for. Nobody outside Apple ( and even few people inside the company ) know the answer to this.

While I think all this is very much possible now, we can never be too sure of what Apple has in store. 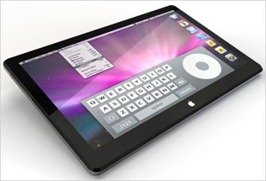