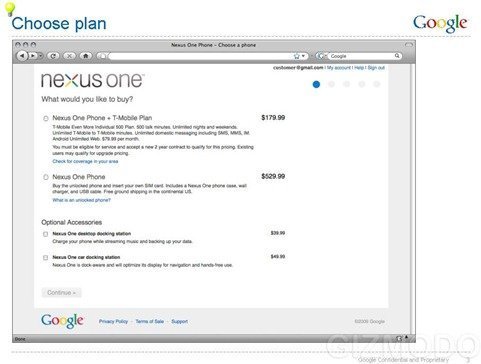 Gizmodo has gotten their hands on leaked documents with official screenshots of pricing and plans of the Nexus One. That’s right, the final name of the Google Phone will be Nexus One and it will cost $530 for unlocked ( not so cheap from Google as everybody expected eh? ) and $180 with T-Mobile after subsidy over a 2 year contract.

Here’s the leaked information from the documents via Gizmodo:

• Yeah, it’s $530 unsubsidized. Google’s not going to be selling the phone at cost, like so many people considered. They’re not going to save us from the “making money off of hardware” culture we’ve got right now, so this is basically just another Android handset, albeit a really good one
• If you want it subsidized, you’ll have to sign up for a 2 year mandatory contract and pay $180 for the phone
• There’s only one rate plan: $39.99 Even More + Text + Web for $79.99 total
• Existing customers cannot keep their plan if they want a subsidized phone; they have to change to the one plan, and this only applies to accounts with one single line
• If that doesn’t fly with you, you have to buy the $530 unlocked version—this actually might save you money over two years if you already have a cheap plan
• Family plans, Flexpay, SmartAccess and KidConnect subscribers must buy  the phone unlocked and unsubsidized for $530
• You can only buy five Nexus One phones per Google account
• There is language in the agreement of shipping outside the US
• Google will sell it at google.com/phone, which explains what they were doing with that page a few weeks ago
• Google will still call it the Nexus One apparently, and not the Google Phone

• If you cancel your plan before 120 days, you have to pay the subsidy difference between what you paid and the unsubsidized price, so $350 in this case. Or you can return the phone to Google. You also authorize them to charge this directly to your credit card. 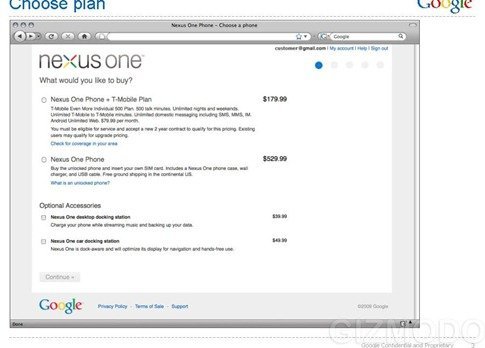 Well, now that the price and plans are out, would you buy the nexus one? Apparently, the phone would cost cheaper over the long run if you buy it unlocked, as compared to the T-Mobile plan subsidized cost. If the price doesn’t help you decide, you can check out the video review we posted earlier or the leaked specifications. Remember, the Nexus One is launching on 5th January, possibly during the Google Android Press Conference being held that day. There hasn’t been any mention of an ‘invite only’ availability as per rumors.

I know I’ll be getting a nexus one for sure!