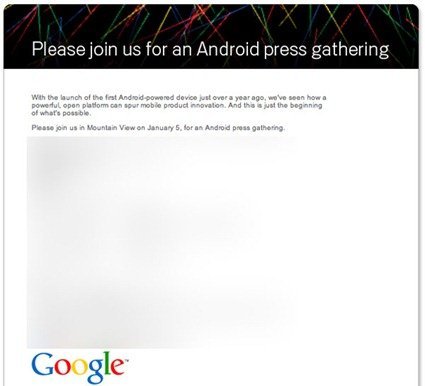 Engadget has received an invite by Google for an Android Press Conference on the 5th of January in Mountain View, California. With the confirmation of the launch date already available thanks to T-Mobile, the Nexus One could be officialy announced at the conference. Here’s what the invite says:

With the launch of the first Android-powered device just over a year ago, we’ve seen how a powerful, open platform can spur mobile product innovation. And this is just the beginning of what’s possible.
Please join us in Mountain View on January 5, for an Android press gathering.

‘Nexus One’ is the Google Phone that everyone has been waiting for, developed by HTC and running Android 2.1 OS. This name could very well change on the 5th of January since ‘Nexus One’ hasn’t been confirmed officially yet by T-Mobile or Google. The specifications of the Nexus One as an iPhone competitor are nothing to laugh at, and YouTube videos have proven that very well so far that if nothing, this will be the best Android phone ever. So we suggest that you hold off from buying the Droid or other currently available Android phones and wait for 5th January, the launch date of the Google Phone ‘Nexus One’.