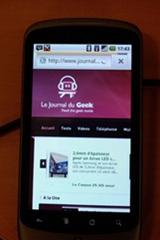 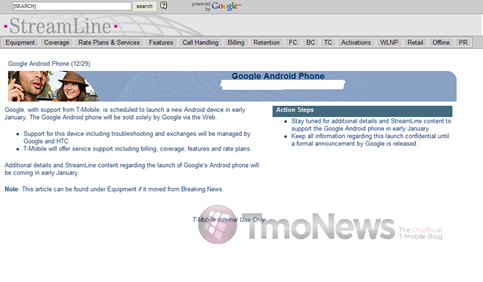 “Google, with support from T-Mobile, is scheduled to launch a new Android device in early January. The Google Android phone will be sold directly by Google via the Web.

Additional details Streamline content regarding the launch of Google’s Android phone will be coming in early January.”

On pricing and plans, TmoNews has this to say:

According to our sources, through an internal system T-Mobile is reporting they are getting an Android device but won’t do any support for it other than “billing, coverage, features and rate plans, as we have previously stated. All troubleshooting and exchanges will be managed by Google and HTC.

The Google Press Conference on the 5th might act as the launch ceremony for the phone. The specifications for the currently known as ‘Nexus One’ Google Phone are already out, and we even have videos of the phone in action. January is ramping up to be a very interesting beginning to 2010. Apple will have to pull out a tablet from somewhere now (not to forget, a better iPhone 4G this year), since Google is coming out with all guns blazing!