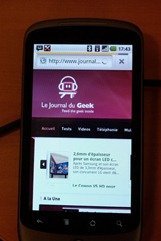 Engadget have gotten their hands on the complete specifications of the Google Nexus One, the most anticipated Android phone. Said to be available as invite only at launch which is said to be on January 5th, it will be powered by a Snapdragon processor clocked at 1Ghz. This processor is the same beast that powers the HTC HD2, so you can expect the Nexus One to be blazing fast. This speed is evident in the walkthrough video the Nexus One. It’s also highly expected that the Nexus One will be available through T-Mobile as well as directly through Google.

The features that stand out in this list are the huge amounts of RAM and Flash, Snapdragon processors, Wi-Fi n networking and the beautiful AMOLED screen.

Here are the specifications of the Nexus One as published by Engadget:

Here’s a walkthrough video of the Nexus One from Youtube: