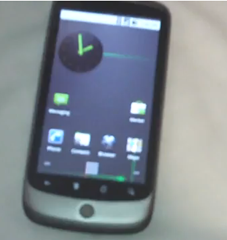 Nexus One is the latest and greatest hyped iPhone killer by Google. This Android 2.1 powered phone with a 1 Ghz Snapdragon processor under the hood is rumored to be launching on the 5th of January 2010. Google hasn’t confirmed this officially, but as the rumored launch date approaches, we’re seeing more videos of the Nexus One popping up around the web. This latest video of the Nexus One can be termed as one of the first hands on reviews, since most other people ( even writers from major blogs ) weren’t allowed to take pictures or record videos of the phone.

The reviewer’s English isn’t the best, but he gets the job done.

The comparisons with the iPhone during the review are interesting, but the fact that he has the phone since 2 days means the Nexus One is really roaming around in the wild.

You might also want to check out the features and specifications of the Nexus One.