Rumors are floating around that Apple might release an iOS 4 update in a few hours which will fix the PDF vulnerability. A member of the iPhone Dev Team, Cpich3g tweeted this a couple of hours ago and advised users to save their SHSH blobs to have the ability to downgrade their OS.

A little birdie told me ios update due in a few hours (better to believe than ignore) so go ahead and save your SHSH before it’s too late! 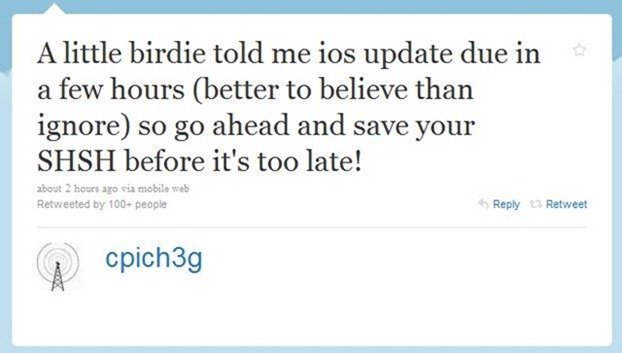 The PDF flaw exists in every iOS version for every iDevice out there. This even includes the first iPhone and iPod Touch so expect them to get this update as well. JailbreakMe uses this vulnerability to hack into the device and allow Cydia to install. While JailbreakMe used this vulnerability, a layer of security was also provided via Cydia called “PDF Loading Warner” which acts as user account control and asks every time a PDF file is to open in the OS.

Stay tuned. We’ll update you as soon as we get word on the iOS update!