At last the mystery of the lost iPhone has finished and now it’s confirmed that Gizmodo have the  real iPhone 4G prototype. Apple’s senior legal chief Bruce Sewell has contacted Gizmodo and asked them to give their iPhone back. 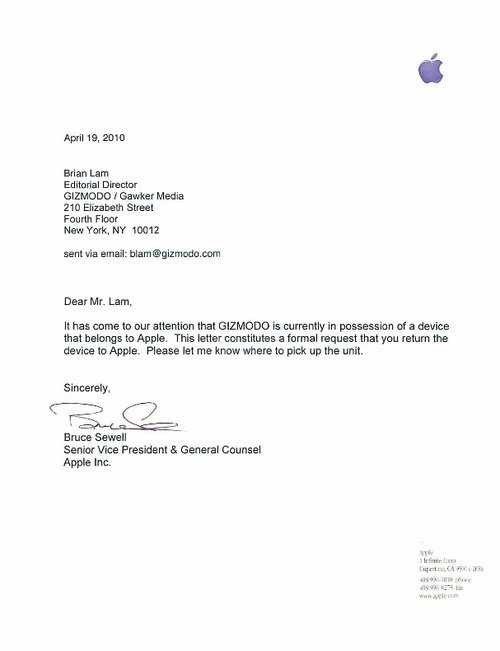 Here is what Bruce Sewell wrote in his letter to Gizmodo:

It has come to our attention that Gizmodo is currently in possession of a device that belongs to Apple. This letter constitutes a formal request that you return the device to Apple. Please let me know where to pick up the unit.

Here is what Gizmodo’s reply was:

Bruce, thanks.
Here’s Jason Chen, who has the iPhone. And here’s his address. You two should coordinate a time.

Happy to have you pick this thing up. Was burning a hole in our pockets. Just so you know, we didn’t know this was stolen [as they might have claimed. meaning, real and truly from Apple. It was found, and to be of unproven origin] when we bought it. Now that we definitely know it’s not some knockoff, and it really is Apple’s, I’m happy to see it returned to its rightful owner.

P.S. I hope you take it easy on the kid who lost it. I don’t think he loves anything more than Apple.

So, soon Apple will get their device back and now it’s proved that this is the genuine iPhone 4G which was lost by the Apple Software Engineer Gray Powell. And I hope that after committing this big mistake, may be the biggest mistake of his life, all goes well for Gray Powell.