It’s no secret that Tim Cook and others at Apple are really excited about their work on augmented reality in the form of ARKit. Their investments in the API as well as on the hardware side of things are starting to show with the launch of iOS 11. App Store is filled with all kinds of games and apps that take advantage of ARKit in different ways. If you have an iPhone 6s and above, you can try the apps right away. But what would be better than using augmented reality on an iPhone or iPad? Augmented Reality in smart glasses. 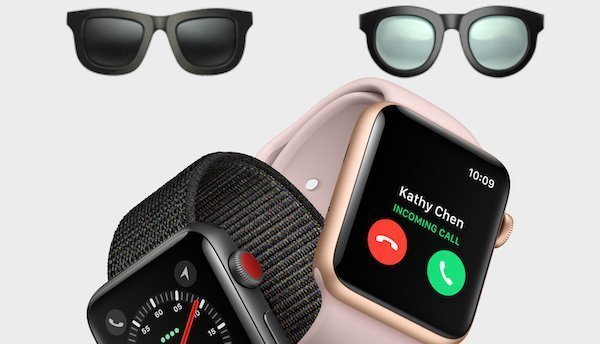 Imagine Google Glass with better design, battery life, performance, cellular and ARKit. Apple has been making their own silicon for a while now and it includes A-series processors with custom performance controllers, GPU, motion coprocessor, secure enclave, wireless chips and more. How can Apple put all of this together in the smallest possible space that glasses would require? The answer lies in Apple Watch Series 3 LTE.

With Apple Watch Series 3 LTE, Apple includes a 70 percent faster dual-core processor, GPS, cellular capability, W2 wireless chip (with 50% more efficiency and 85% faster performance), wireless charging and more in a small package. Infact, Series 3 is almost the same size as Series 2 Apple Watch models with the different being a few millimeters. On top of all this, Series 3 still has an all-day battery life. The battery takes more than 50% space in an Apple Watch so even if a smaller one is used, Apple could repackage all these components, add a camera, and use them for smart glasses. The only missing piece in this component puzzle is a great transparent display. However, there are a number of companies out there that are creating such displays that could be used in Apple’s glasses.

Of course, it sounds simplistic while writing but I can’t imagine any other company better placed to create smart glasses that could go mainstream. As per rumors and patents, Apple has been working on prototypes for augmented reality glasses and might be aiming to launch them by next year. I can’t wait to hear more rumors on this.