Apple had announced that it plans to release the iPad at the end of March or early April  and now we are hearing rumors about the release date of the iPad being March 26. Apple hasn’t provided any official information about the launch, but people close to sources have heard that like the iPhone launch, the iPad will be go on sale possibly at 6:00 PM on March 26, 2010. They also say that people who will line up for the iPad on launch day will also receive a special gift. 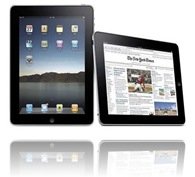 Last week, Peter Misek, an analyst at Canaccord Adams, reported that there was an “unspecified production problem” at the headquarters of iPad manufacturer Hon Hai Precision. Misek predicated the number of iPads available at launch would be 300,000 or less; he also speculated that the iPad might not be available to US consumers until April. Because of the limited stock of iPad the company decided to release iPad in two models, a Wi-Fi version and a 3G version.

It was recently found that the iPad 3G will be capable of making emergency calls although it’s not expected to be available until April or May. The rumored date of March 26 is only for the Wi-Fi model.