Recently, we wrote about Microsoft’s upcoming project, Mobile Surface, which was introduced at the TechFest 2010 in Redmond. Microsoft demonstrated another cool project at TechFest 2010 called OneAlbum that uses facial recognition and event-matching technology to automatically retrieve photos that would interest you from your social networks and your friends’ online photo albums and add them to yours. 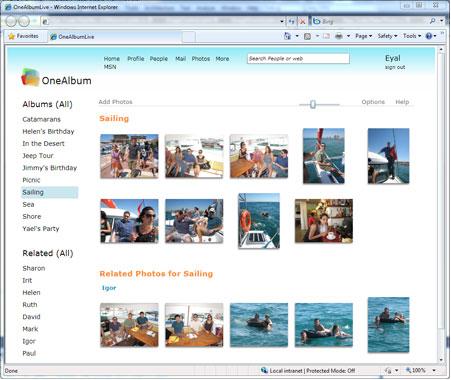 “Today, my album refers to a collection of photos I have taken. But many photos relevant to me—such as photos of me or my children—are in my friends’ albums. OneAlbum automatically finds relevant photos in my friends’ albums on social networks or in shared albums, brings them to my album, and shows them side-by-side with the photos I’ve taken. OneAlbum uses breakthrough technology to recognize which photos interest me by analyzing my own album.”

Furthermore, she said that the novel, unsupervised algorithm behind OneAlbum was tested on real large-scale albums including tens of thousands of photos and achieved accuracy rates as high as 90 percent. Looks like it will be the end of manually tagging pictures in different social networks like Facebook, when you can find all of your photos with facial recognition.

A video has also been posted on Microsoft research website which shows OneAlbum in action.