As expected we’re getting to see a lot of tablets floating here and there, but the Asus Eee PC T101MT is a netbook and tablet mashed together. Don’t be fooled by its hardware, it’s surely capable of doing more than what it’s made to do. 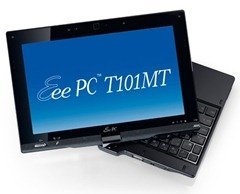 Don’t let the “netbook” tag fool you into a stereotype that they’re slow and are bound to a lot of specific tasks like using the internet and writing a couple of e-mails at most. We’re quite impressed with the hardware it packs which makes it a capable netbook/tablet PC.

It sports a 10 inch touchscreen display which is capable of handling multi touch gestures, and has a resolution of 1024 x 600 pixels which is not bad for a netbook of its class. Under the hood is Windows 7 Home Premium.

We can call it an iPad competitor because the Asus T101MT has a few feature which the iPad lacks, such as a physical keyboard. A price tag of $499 is definitely a good deal, add a few extra bucks on a regular netbook and get the Asus T101MT instead.