Blu, the WPF Twitter app for Windows XP and beyond, has been finally updated with the long awaited Twitpic integration, and have they nailed it! It has a very simple but intuitive way of uploading the images, without any extra clicks or hassle what so ever. Actually, it’s a ‘clickless’ process just like the TinyURL integration in Blu.

The main UI hasn’t changed much except for the Tweet panels looking bigger than before and some other nice little touches. Animations and scrolling seem faster and much smoother now. Clicking a hashtag opens up the search results in a browser now.

Here’s a walkthrough of the major changes and new features in this update.

Just drag and image to the application and it’ll automatically be set for uploading on the side. 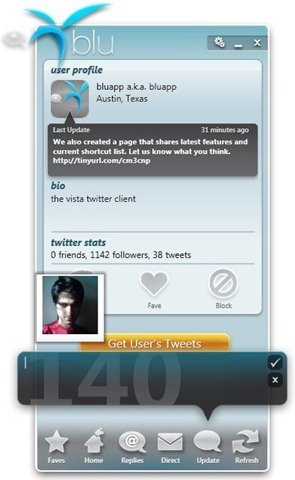 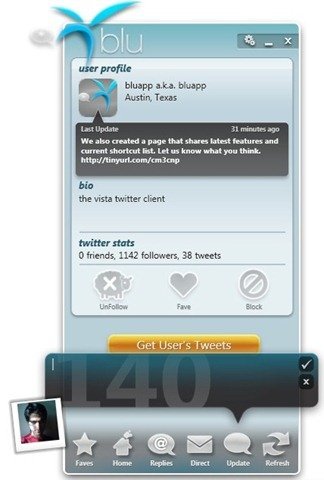 Just type in your tweet and send it. The app will ‘blink’ until the upload is complete. Cool eh? The coolness doesn’t end here. Try hovering your mouse over any Twitpic URL, and you’ll see a preview of that image pop up. It is really useful! 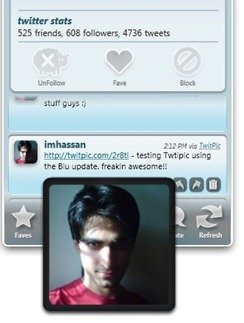 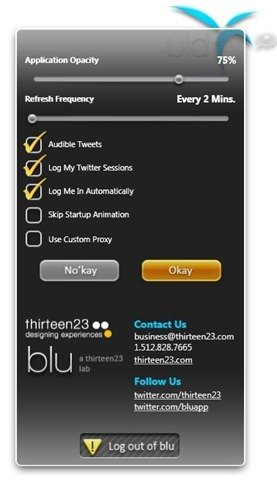 You can now use a custom proxy for Blu. This is helpful if you’re behind a proxy, or if Twitter is blocked in your office ;) . The startup animation can be skipped as well now, although that would ruin most of the fun. Also, the options now open by flipping the application 180 degrees, just like some apps on the iPhone or some other Adobe Air apps. The flipping effect is really smooth, though.

Search is still not there in Blu, and I would like to see a back button as well since it’s easy to roam around some tweets and then read a reply and not be able to find it again. Some information on the API usage will be handy as well, so you can keep a check on your usage.

The overall performance of Blu seems to be improving with every new update, and this one isn’t an exception. It just keeps getting better and better. If you haven’t gotten the update pushed to you yet, try reinstalling it from the Blu website. You can also check out the Official Blu info page for a change log and keyboard shortcuts.